The Ozone 500 Mountain Bike is becoming more and more popular these days, and we’ve seen more than a few cyclists (mostly teenagers) on the streets rocking this department store-bought bike around. This actually piqued my interest in the bike, but after a cursory google search, I noticed there aren’t many reviews. Why is this seemingly ubiquitous bike not so popular among bike reviewers? I have no idea. One website even had a post about the Ozone 500, but it was literally gibberish—it was paragraphs lifted from all over the internet that had absolutely nothing to do with bikes, interspersed with pictures of the Ozone 500 bike. What the hell, man? 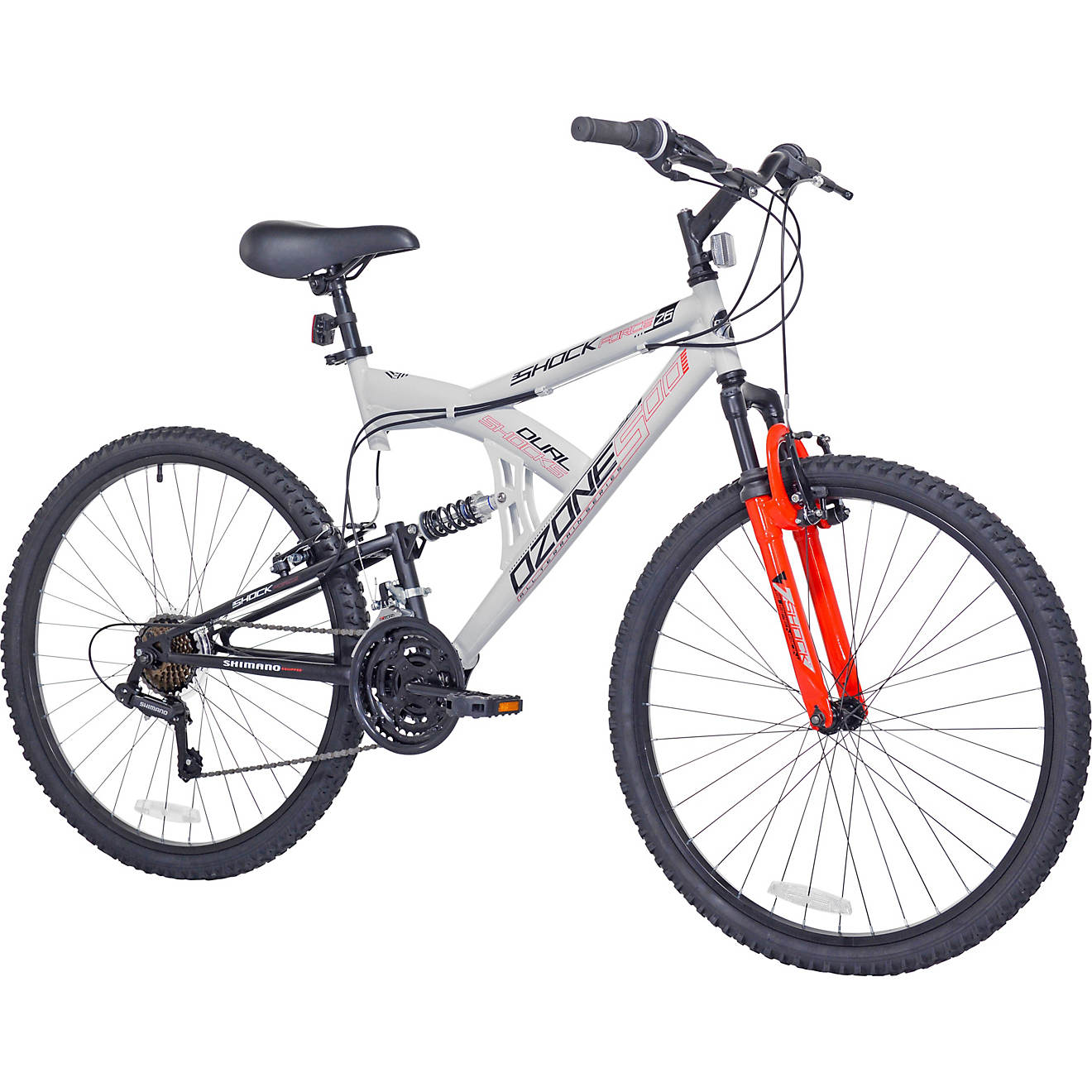 In any case, the dearth of reviews of this bike online made me decide to do one myself. After all, I review many bikes, so why not this one, right?

So we got one from Walmart. And, boy, was it cheap. I paid less than $150 for it—how cheap is that for a bike? I’m definitely not expecting much, but we’ll see.

First things first, this Ozone 500 bike has got a Shimano gear set. Thankfully, because Shimano is pretty reliable. Hopefully, this isn’t the only thing in this bike that’s reliable and worth writing about—it is, after all, an extremely cheap bike. The seat, yeah, it was pretty hard. I won’t describe sitting on this slab for long trails as having fun. But, sure, that’s easy to replace, so I’m just going to overlook that for now.

It’s steel. Of course, it is. It’s durable enough, to be sure, but this thing is heavy. The Ozone 500 Ultra Shock 26″, at 40 pounds, it’s a little too heavy for my taste—and probably for a lot of avid bikers’ taste. At least someone will think twice before stealing this thing, given how heavy it is—yes, a lot of my bikes have been stolen in the past.

Going back to the frame; it’s a good enough looking bike. The dual suspension actually makes it look edgy from a distance, especially the suspension behind, with the frame’s angular appearance. And the color combination is cool enough.

But if one looked closer, well, it’s a different story. The paint was uneven, and the frame looks like it was welded in a hurry. In fact, it looks like this was made by a man who had to weld a hundred of these things a day and had to cut a few corners. But hey, it is a department store bike, so I guess that’s par for the course.

Because of the rather bulky and heavy steel frame, it took a while to get up to speed. And it was, to be sure, tough to maneuver when compared to other, relatively well-performing bikes in the $200 dollar range. The responsiveness of this bike is, how shall we say, not very impressive, but yeah, it’s not exactly day-ruining in my opinion. I guess the best thing I can say about it thus far is that, as a cheap bike, “it works.”

The linear brake of the Ozone 500 performs great, at least. But, you can thank Shimano for that. The tires are, as you would expect, very cheap. Of course, they work, and you can probably get a good number of miles from them, and might even get it to last for a good while if you intend to ride this solely on the tarmac. But if you go through trails often, or do even just the minimal amount of off-roading, then no, it won’t last long. You can replace them, but what’s the point? You might as well buy a better bike.

The Ozone 500 bike has an Index 21S derailleur with a Shimano 21-speed. It’s relatively smooth, thank God. I can’t say I’ve ridden this thing long enough to be able to tell how long it will remain smooth and quiet, but I’m confident, at least from what I’ve experienced so far, that it will remain so for a good while. They got this part right, at least.

But be careful as this could be a one-off. I’ve definitely bought cheap bikes whose derailleurs were smooth, only to find out my friend who bought the same bike had the opposite experience.

Do they do a great job? Yes and no. Yes, they do some kind of job—that is to say, sure, they work. These aren’t fancy shock absorbers, to be sure, no matter how edgy they look from a distance. But they absorb… some shock. At least I feel that they do. But—now this is the big but—remember we’re talking about a 40-pound bike here, and a cheaply made one at that, so don’t think you can be using this Ozone 500 bicycle to go off-roading and be jumping over rocks. 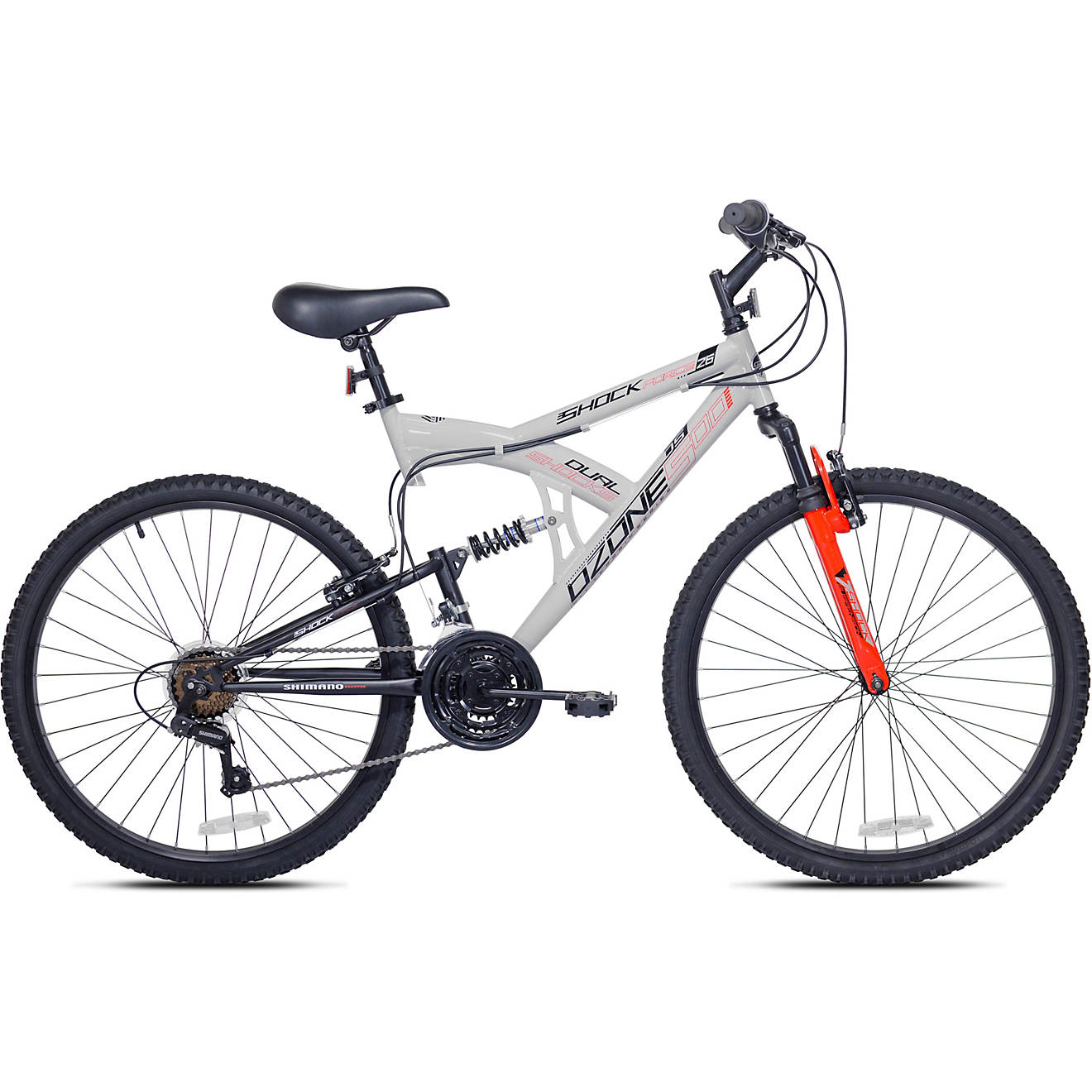 Well, what else can we say about the Ozone 500 Bicycle? Can we recommend this bike? Sure, if your teenage kid asked for a bike for his birthday, then, by all means, this could be a great option. Just make sure he rides over tarmac only, and not on a, you know, actual off-road MTB trail. Will this be a good bike for the average, novice consumer? Well, it is cheap, so that’s one thing good about it. We can definitely recommend this bike to someone who just wants some casual riding fun, and to one who is on a really—like, really!—tight budget. But if you have a bit more to spend, then we’d recommend you get another, better quality one.